A day in the life of Jouri

Jouri is a 19 years old Palestine refugee girl from Ein el-Hilweh camp located in Saida city, south of Lebanon. She was brought up in Ein el-Hilweh, but a few years ago her family moved outside the camp to an apartment in a quiet neighbourhood in the suburbs of Saida that is 15 minutes away from the camp. Jouri’s parents, and especially her father, were afraid for the safety of their children in the camp. The camp is notorious for its continuous violent clashes between the different Palestinian factions and the increasing prevalence of violence and drugs among the youth. However, Jouri still goes to the camp almost every day to attend an UNRWA school located inside Ein el-Hilweh and all her friends still live in the camp.

This is Jouri’s second year in school after a two-year interruption. When she was 15, Jouri’s family forced her to get engaged to her brother’s friend. Jouri does not like to talk much about her engagement years as they are very painful to her, and she cannot recall her engagement without bursting into tears. Once Jouri was engaged, her fiancé forced her to leave school. Her family did not have a say in this as it was up to her fiancé to decide everything related to Jouri. Jouri’s was psychologically distressed and after her insistence for a long time to end her engagement and go back to school, her family finally supported her decision when it became apparent that she was psychologically vulnerable. After two years, Jouri ended the engagement and returned to school. Although it was hard for her to return, Jouri studied hard, took educational support courses at a local NGO in Ein el-Hilweh, passed Grade 9 and the official Lebanese Brevet exams that allowed her to enrol in secondary education. She is the first girl to evade early marriage in her family, all the women starting from her grandmother, to her mother and older sister, she only felt she was successful when she returned to school. 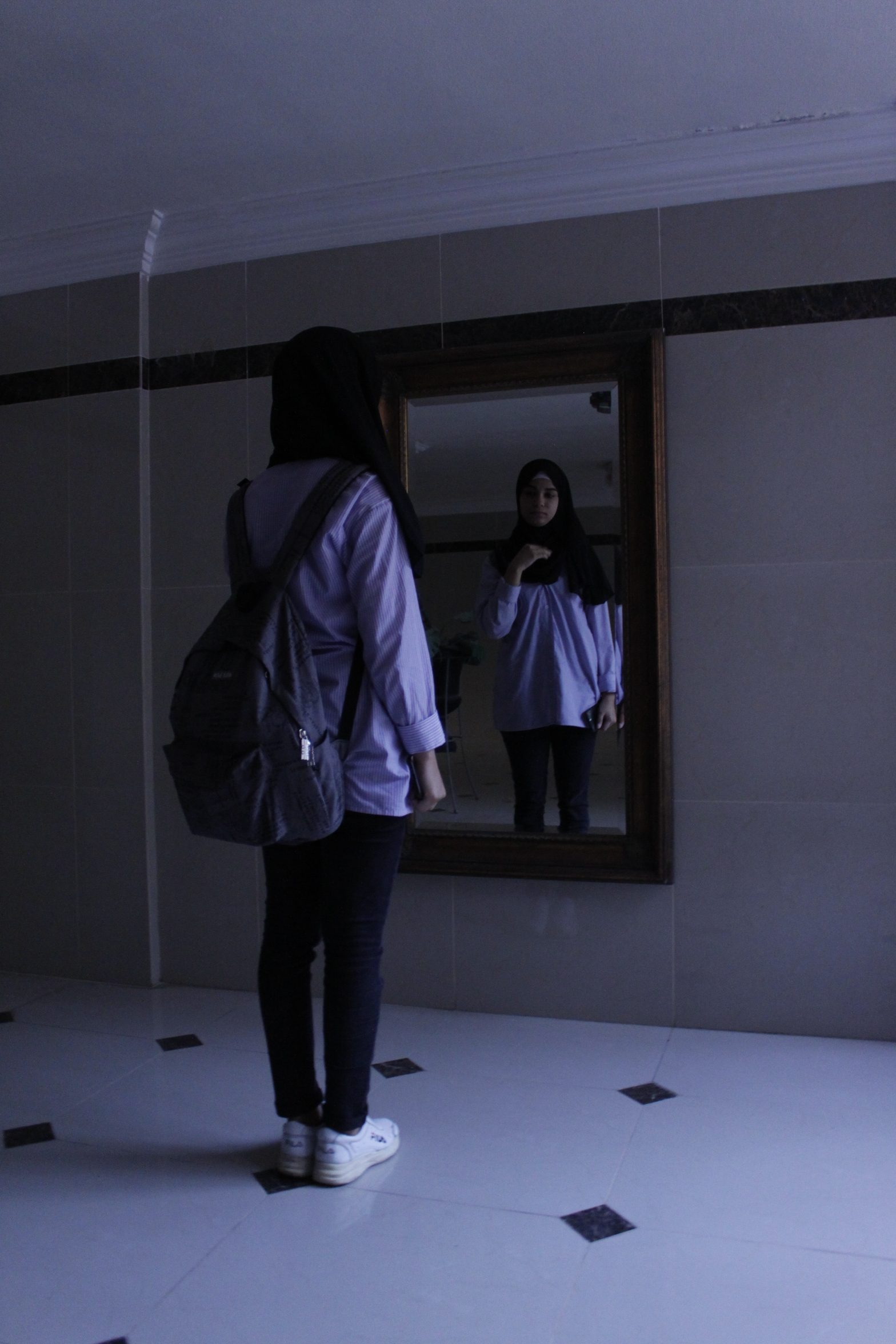 Jouri starts her day very early. She wakes up at 5.00 in the morning and prepares herself to go to school. Jouri needs to be ready earlier than her friends because her brother is the school bus driver and she goes to school with him. Thus, she must be ready once he starts his morning rounds.

Making sure all is prepared for the school day

Jouri makes sure she is well prepared for her school in the morning. After she gets ready, she revises her homework and ensures that all is completed for her classes. Jouri wants to make the best of her education because she values the opportunity she has to return to school. Before leaving for school, Jouri talks with her friends from her old school because she cannot take her phone with her to school, and she can only talk with her friends over the phone when she is at home. 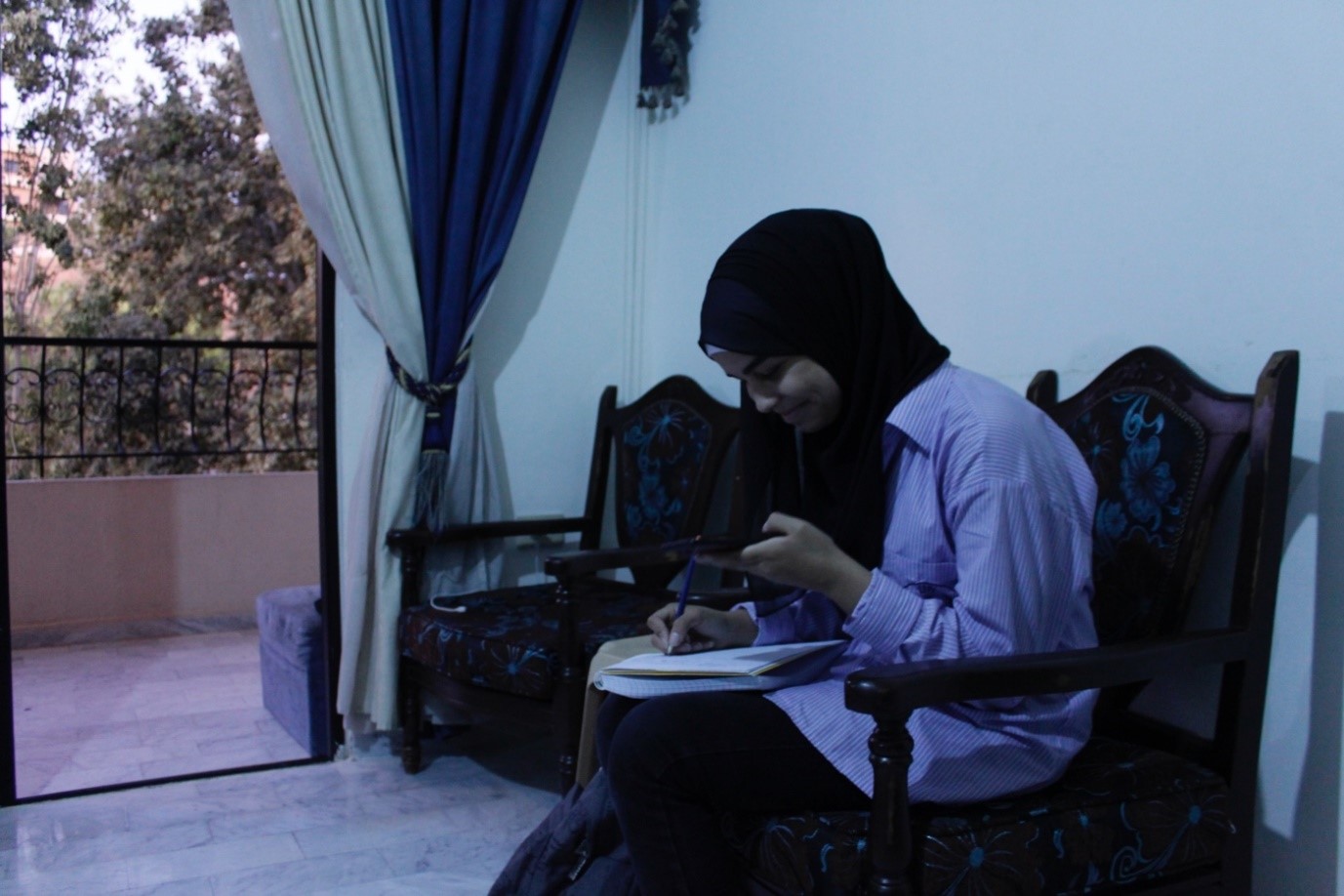 Jouri does her best to excel in her studies because she knows the importance of a proper education. However, Jouri is considering moving to a vocational school next year. This is because it is unlikely for her to enrol in tertiary education as her family cannot afford the university high tuition fees, especially that there are very few scholarships available for Palestinians in Lebanon and the competition is fierce.  In addition to that, the cultural norms in the Palestinian community restricts girls’ education, especially at the tertiary level. This is due to fears about girls’ safety as well as the perceived impact of  mixed gender and nationalities at the universities on girls’ morals and reputation in the community, as parents and brothers assume they would demand greater freedoms. According to Jouri, “Even if I get an 80% average in school, which entitles me to a scholarship, I don’t think my father would allow me to go to a university”. Jouri is planning to study accounting at the vocational school, as it would allow her to learn a skill and easily find work later on in her . 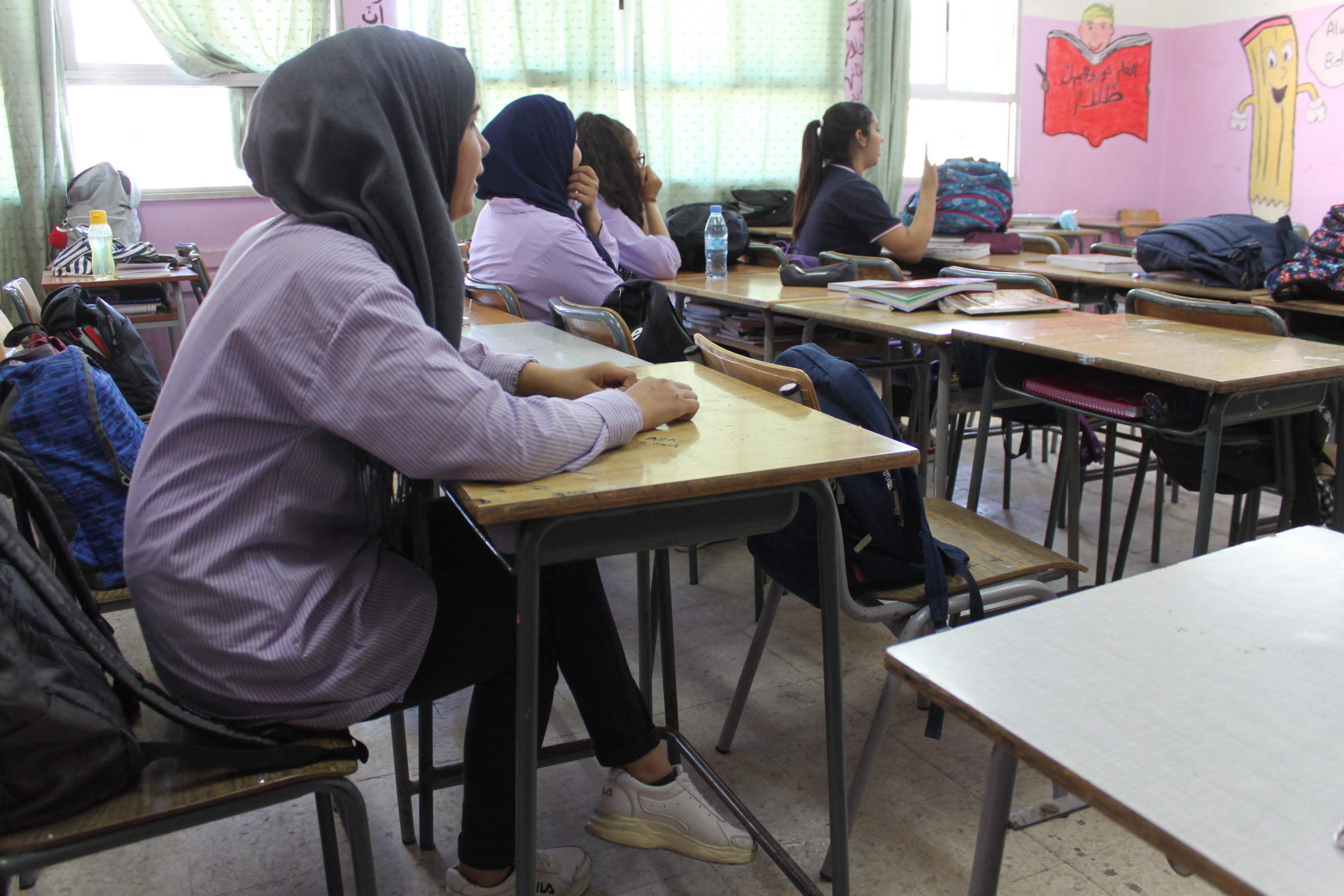 Making friends in the new school

Jouri had to a move to a new secondary school because her old school offers up to Grade 9 only. It is not easy for Jouri to make new friends at her new school, she spends most of her time at school alone. Jouri has been already struggling in keep in contact with her old friends especially after she moved out of Ein el-Hilweh camp. Her father does not allow her to spend time in the camp after school hours because he fears for her safety. She is also not allowed to go out with friends without a male guardian. She is barely able to meet her friends unless they join activities together at the local NGOs in the camp. Jouri and her close friend joined the GAGE participatory research group together, which allows them to learn new skills and frequently meet each other.

During the second recess, the girls at Jouri’s school buy chips and chocolate for lunch because the school does not offer meals for lunch. Jouri likes to buy chips and she offers to buy her classmates  chips as a way of trying to make friends with them. 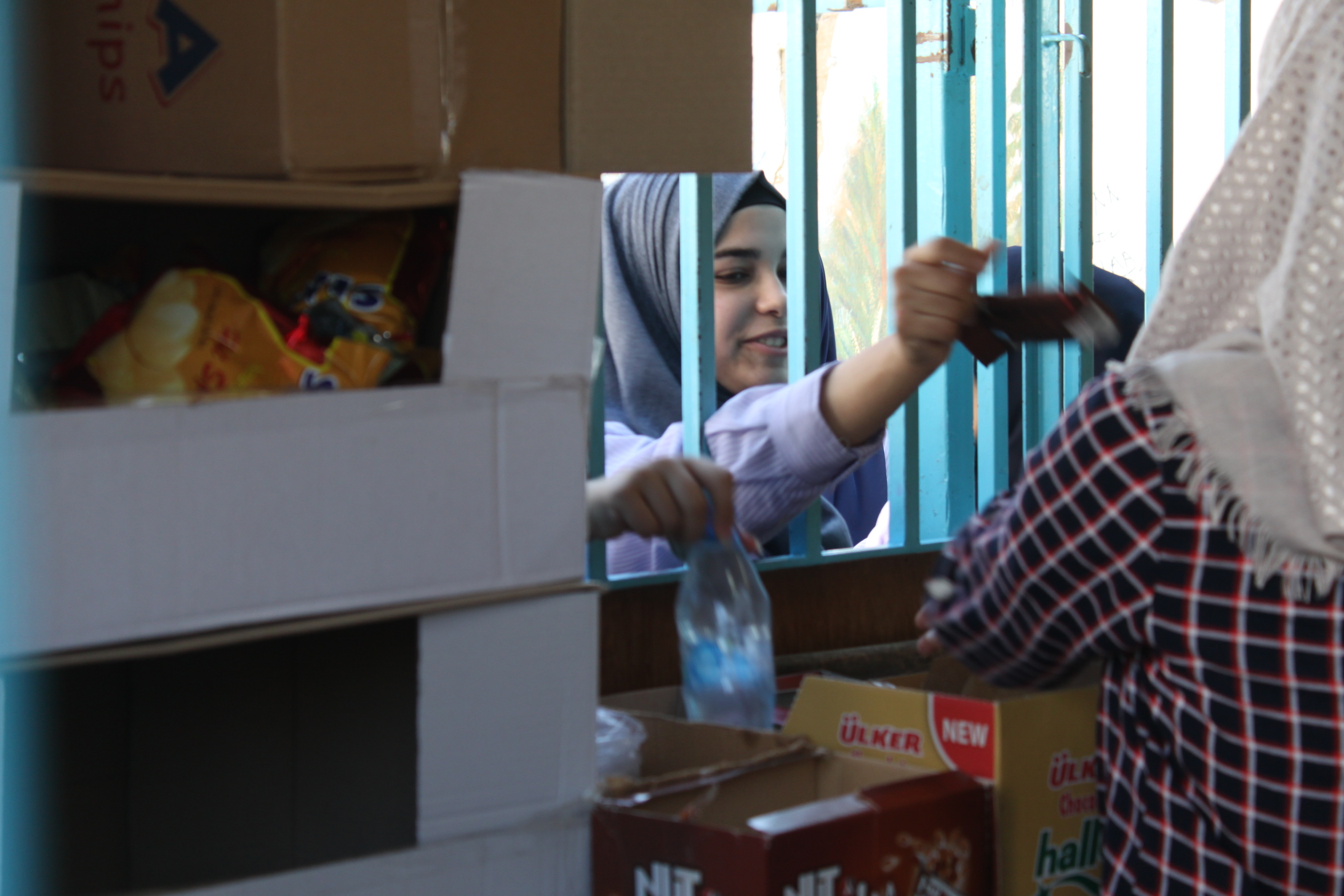 Extracurricular activities and safety at school

Jouri’s school is a gender-segregated school. Sports spaces and balls are only offered to the boys at school. According to Jouri, “only boys usually play physical games, but we would like to have some fun also”. Jouri and her friend exceptionally got the permission of the boys’ sports teacher to use the playground and play volleyball during the class time. The lack of extracurricular activities at school upsets Jouri who loves sports.

A more pressing concern, however, is the fact that the school is often unsafe for the students due to the frequent armed clashes around the school. Jouri and her friends are often caught under fire at their school and evacuated from school during the school hours. This makes Jouri distressed at school due to her constant fears of the continuous eruption of violent clashes between political factions around her school.

Going back home from school

Jouri arrives last in the bus to her home because her brother drives her home after he finishes his afternoon tour. Jouri spends her afternoon at home studying; she is often overloaded with homework, which make her feel depressed and anxious. Most of the time, Jouri also helps with the housework and cooks food for her family because her mother is often ill. She likes to be engaged in extracurricular activities, but very few are available for girls in her community. Jouri recently started attending a Dabke class (a traditional Middle Eastern dance) at a local NGO in Saida city, which she enjoys a lot. She hopes she can participate in Dabke tours in the future, but she is not sure her family will allow her, especially that girls in her community must be home before the sundown time. Although Jouri’s days are long and tiring, she goes to bed late at night around midnight – she likes to surf social media while in bed and talk to her friends before she sleeps. 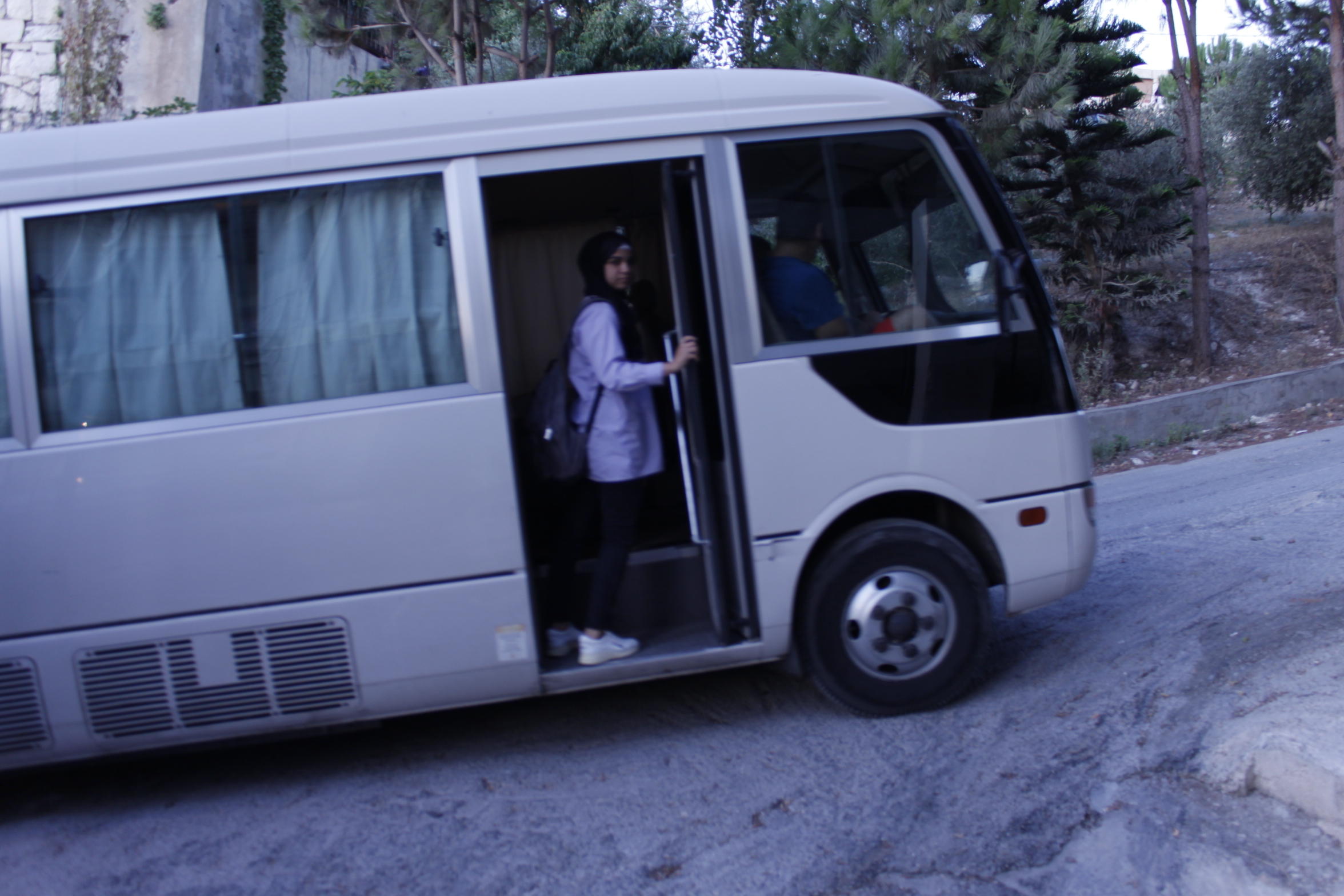