The context: While birth rates are falling in Ethiopia, over half of all Ethiopians are under the age of 20. Poverty rates are also declining but nearly one-quarter of all citizens live below the poverty line. Moreover, Ethiopia is one of five countries accounting for the world’s largest absolute numbers of people living in poverty. 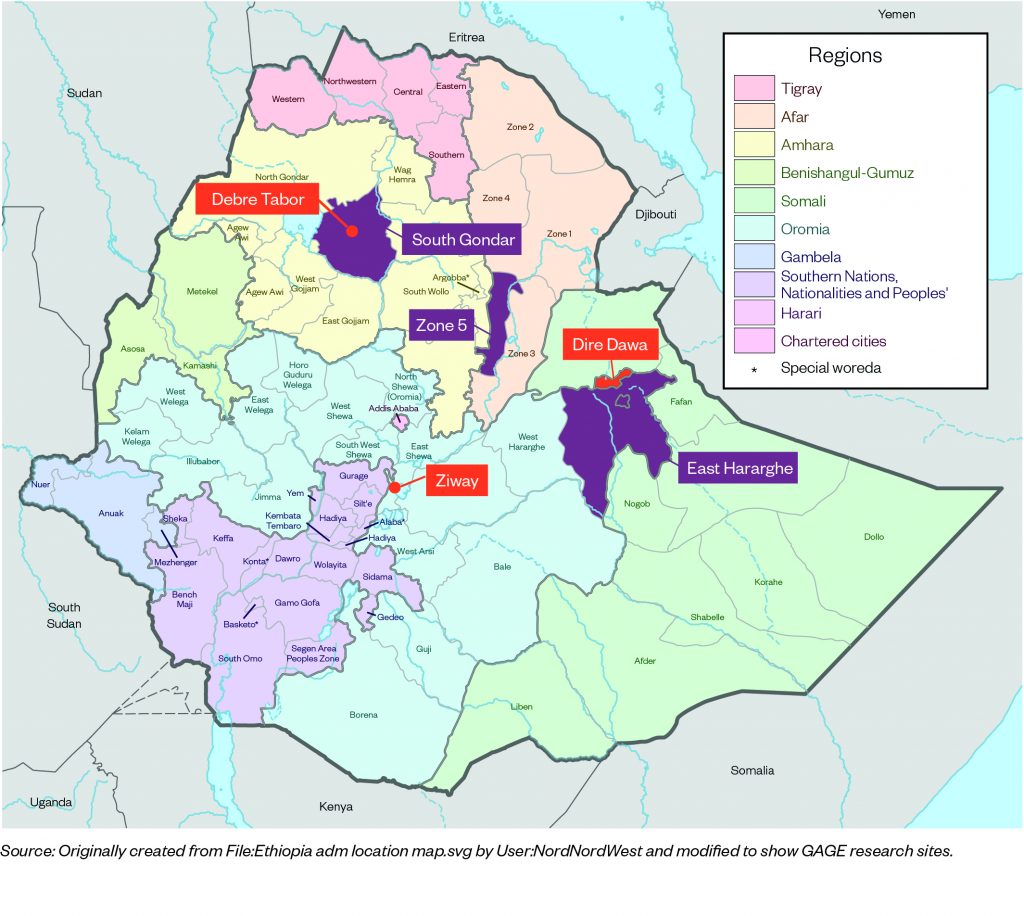 Our research: In Ethiopia, which is located in the Horn of Africa, we are following over 7,000 adolescent girls and boys from rural, urban and pastoralist communities in three regions: Afar, Amhara and Oromia. In addition to the adolescents themselves, our research includes their siblings, caregivers, teachers and other community members.

Education and learning: Ethiopia has made remarkable progress in equitably expanding primary education over the last two decades. Even so, dropout rates remain high, with only about half of young people completing grade 5. Enrolment rates are less than 10% in upper-secondary school, and learning outcomes are extremely low. Differences between girls and boys vary by region and age. While at a national level and across all grade levels girls arenow more likely to be enrolled than boys, in some regions –including Afar and Somali –adolescent girls are effectively excluded from school.

Bodily autonomy, integrity and freedom from violence: Adolescent girls and boys face distinct risks from different forms of violence, due to gender norms. Girls are highly vulnerable to child marriage, with two in five married before the age of 18; to female genital mutilation or cutting (FGM/C), with nearly half undergoing the practice; and to sexual violence, with one-third of married girls aged 15–19 having experienced violence at the hands of their partner. Violence by other perpetrators is common as well. One survey, for example, found that nine out of 10 girls had been physically abused and seven out of 10 had been psychologically abused, most often at the hands of their mothers. Boys tend to experience more violent discipline at home and at school, and are more likely to engage in –and be victimised by –bullying and youth violence.

Health, nutrition, and sexual and reproductive health: Due to the expansion of Ethiopia’s Health Extension Worker programme and a reduction in food insecurity, adolescents have good access to basic preventative care and are generally better nourished than older cohorts. Ethiopian adolescents’ exposure to SRH-related information is mixed. Messaging about contraception and HIV is widespread. The 2016 DHS, for example, found that 61% of adolescent girls between the ages of 15 and 19 (and nearly 74% of adolescent boys) knew that HIV could be prevented by using condoms, and that girls were quite likely to have been exposed to a family planning message on the radio (24%) or at a community event (27%). However, broader SRH education is rare. Social norms that leave sexual topics taboo and stigmatise girls’ sexuality, mean that most younger adolescents have limited information about puberty, that girls approach menarche with shame and fear, and that many girls cannot access contraception due to social barriers.

Psychosocial well-being: Very little is known about adolescents’ psychosocial well-being, though mental health problems appear to affect a considerable number of children and adolescents (between 12% and 25%). Girls who are married or working as domestic workers tend to be socially isolated and especially likely to be depressed and anxious.

Economic empowerment: We know little about the economic empowerment of adolescents. Younger adolescents are effectively invisible and older adolescents are almost universally considered as part of the larger group called ‘youth’, which includes young adults up until the age of 30. Rates of unemployment for youth and women are high, in large part because despite economic growth the economy cannot keep up with population growth, and most youth and women are confined to the poorly paid and poorly protected informal labour market.

The evidence base: The evidence base on Ethiopian adolescents is considerable – especially regarding education, child marriage, and sexual and reproductive health. However, it is clear from our Evidence Mappings that there is insufficient attention to age differentiation and that there is very uneven geographical coverage,and thus insufficient information on the ways in which Ethiopia’s diverse cultural norms and practices shape adolescent experiences.

The Child Research and Policy Forum (CRPF) seminar, currently funded by GAGE, has been held at the Ministry of Women, Children and Youth since 2010. Read more.